​With hydropower, overfishing, climate change and pollution on the rise, populations of migratory freshwater fish species have plummeted globally by 76% on average since 1970, including a 93% collapse in Europe.
This is according to the first comprehensive global report on the status of freshwater migratory fish by the World Fish Migration Foundation (WFMF), Zoological Society of London (ZSL), International Union for Conservation of Nature (IUCN), World Wide Fund for Nature (WWF), and The Nature Conservancy (TNC) [1].

Migratory fish, such as salmon, trout and Amazonian catfish, are vital to meet the food security needs, as well as support the livelihoods, of billions of people around the world. They also play a critical role in keeping our rivers, lakes and wetlands healthy by supporting a complex food web [2]. Now, their populations are under immense threat from human-made impacts, requiring urgent action to halt and then reverse the alarming decline.

“The global decline in freshwater fish species remains poorly appreciated among national and international policy making bodies,” says William Darwall, Head of the Freshwater Biodiversity Unit in IUCN's Global Species Programme. “This report will hopefully increase the importance given to this unprecedented biodiversity decline in policy targets and lead to the urgent actions necessary to safeguard this vitally important component of biodiversity which serves as a critical resource for so many people.”

The collapse in migratory freshwater fish populations is worse in Europe than any other continents. This data is part of an alarming regional trend. In the EU, 60% of rivers, lakes, wetlands and streams are currently not healthy, impacting on the quality and availability of water and the species populations they house, including freshwater fish species (migratory and non-migratory), birds, mammals and amphibians.

The huge number of dams, weirs and barriers in Europe - many for the purposes of hydropower, but also flood defence, irrigation and navigation - is one of the main reasons for the terrible state of rivers and decline in migratory freshwater fish species. Just last month, Europe was shown to be the most obstructed river landscape on the planet, with at least 1 million barriers in operation. This data starkly complements the first Europe-wide mapping of hydropower plants, released by WWF last year, which found the continent’s rivers to be saturated with more than 20,000 hydropower plants, and more than 8,000 additional ones on the cards.

Over 90% of all the existing and planned hydropower plants in Europe are small, generating at most 10 MW of electricity. If all the planned small projects mapped by the study were carried out, their contribution to the total net electricity generation in the EU would be between 0.2 and 2%.

Where do we go from here?

Through the EU Biodiversity Strategy [2] and the EU’s water protection legislation [3], Europe has the tools to tackle the catastrophic decline in migratory freshwater fish species at the source. However, given the colossal number of hydropower plants in Europe and the environmental havoc these wreak, implementation must go hand in hand with a radical shift in how this energy source is perceived, authorised and financed by the EU.

“The impact hydropower dams have on rivers and their biodiversity – in stark contrast to the contribution they make to renewable energy – is alarming." said Claire Baffert, Senior Water Policy Officer at WWF’s European Policy Office. "Whilst the sector is by no means the sole culprit for the catastrophic decline in Europe’s migratory freshwater fish species, it is a key driver and has been disproportionately financed by the EU over the years. With more than 20,000 plants in operation, Europe’s hydropower potential has been harnessed. WWF calls on the EU to stop supporting the construction of additional plants, and invest in removing or refurbishing existing barriers.”

Arjan Berkhuysen, Managing Director of the World Fish Migration Foundation, said, “Catastrophic losses in migratory fish populations show we cannot continue destroying our rivers. This will have immense consequences for people and nature across the globe. We can and need to act now before these keystone species are lost for good.”

The authors and organisations associated with this report all call upon the global community to protect free-flowing rivers and guide basin-wide planning by addressing existing threats, adhering to ongoing conservation initiatives and water protection laws, investing in sustainable renewable alternatives to the thousands of new hydropower dams that are planned across the world and fostering public and political will as a part of the Emergency Recovery Plan for freshwater biodiversity. 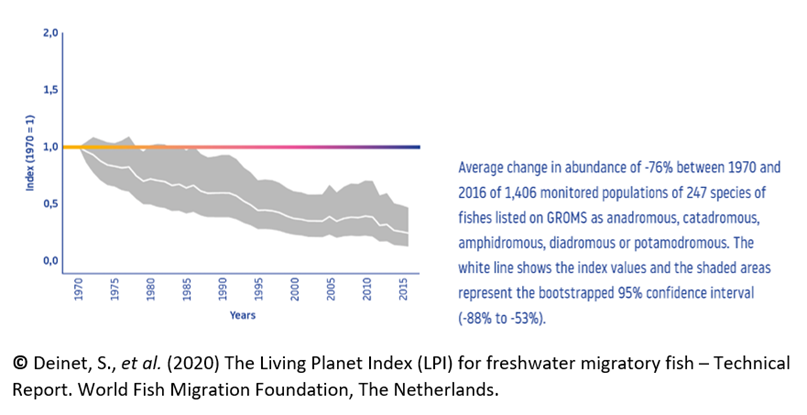 [1] The average figure was found using abundance information for 1,406 populations of 247 fish species listed on the Global Register of Migratory Species.

[2] Migratory fish are invaluable to human health and the global economy; they are a primary protein source for over a billion people worldwide and fish and fish-byproducts represent one of the world’s most traded products within the food sector. The recreational fishing industry alone is worth billions of dollars and tens of thousands of jobs.

[3] Through the EU Biodiversity Strategy, the European Commission put forward a concrete commitment to restore at least 25,000 km of free-flowing rivers, including through dam and barrier removal.

[4] Adopted in 2000, the Water Framework Directive aims to bring the vast majority of EU rivers, lakes, streams, wetlands, groundwater, transitional and coastal waters back to good health by 2027 at the very latest. In doing so, it strives to secure these habitats and the crucial benefits of healthy freshwater ecosystems provide, such as absorbing and storing carbon, filtering water, and acting as natural flood defence.

Notes to the editor:

Globally, monitored populations of migratory freshwater fish have declined by an average of 76% between 1970 and 2016. Average declines have been more pronounced in Europe (-93%) and Latin America & Caribbean (-84%).
© Seppo Leinonen / World Fish Migration Foundation